pcb boards component side solder side

Speaking of PCB board, many friends will think that it can be seen everywhere around us. From all household appliances, various accessories in computers, to various digital products, as long as electronic products almost always use PCB boards, then what is PCB board? PCB board is Printed Circuit Block, which is a printed circuit board for electronic components to be inserted, with a line base. The copper plated substrate is printed with an anti-corrosion line by printing and etched out of the line.

In this case, we need to make holes in the board so that the pins can pass through the board to the other side, so the parts are soldered to the other side. Because of this, the front and back sides of such a PCB are called Component Side and Solder Side, respectively. The double-layer board can be seen as consisting of two single-layer boards that are relatively bonded together, with electronic components and traces on both sides of the board.

The problem of connecting the lines between the layers is also encountered on the multilayer board, and can also be acquired by the via holes. Since it is a multi-layer board, sometimes the via holes do not need to penetrate the entire board. Such via holes are called Buried vias and Blind vias because they penetrate only a few layers. A blind hole connects several layers of internal to a surface board without penetrating the entire board.

The buried hole is only connected to the inner board, so the light is not visible from the surface. In the multi-layer board, the whole layer is directly linked to the ground line and the power supply. So we classify each layer as a signal layer, a power layer or a ground layer. If the parts on the PCB require different power supplies, this type of board typically has more than two layers of power and wiring. The more board layers are used, the higher the cost. Of course, the use of more layers of board is very helpful in providing signal stability.

The professional PCB board production process is quite complicated, taking a 4-layer PCB board as an example. The motherboard's PCB is mostly 4 layers. When manufacturing, the middle two layers are respectively crushed, cut, etched, oxidized and electroplated. The four layers are the component surface, the power layer, the ground layer and the solder layer. Then put these 4 layers together and crush them into a PCB of a motherboard. Then punch holes and make holes.

After washing, the outer two layers of the line are printed, copper coated, etched, tested, solder mask, silk screen. Finally, the whole PCB (including many motherboards) is stamped into the PCB of the motherboard, and then vacuum-packed after passing the test. If the copper coating is not well applied during the PCB manufacturing process, the paste may not be firmly adhered, and it is easy to imply a short circuit or a capacitive effect (prone to interference).

Vias on the PCB must also be noted. If the hole is not in the middle, but is biased to the side, it will produce a non-uniform match, or it will easily come into contact with the middle power layer or the ground layer, resulting in potential short circuit or poor grounding.

The first step in the production is to create wiring that connects the parts. We use a negative transfer method to present the working film on a metal conductor. The trick is to lay a thin layer of copper on the entire surface and remove the excess. Additional transfer is another way of using less people. This is a way to apply copper wire only where needed, but we won't talk much about it here. A positive photoresist is made of a sensitizer that dissolves under illumination.

There are many ways to handle photoresist on copper surfaces, but the most common way is to heat it and roll it on the surface containing the photoresist. It can also be sprayed on the head in a liquid state, but the dry film type provides a higher resolution and can also make a thinner wire. The hood is just a template for the PCB layer in the manufacturing process.

The general width should not be less than 0.2mm (8mil)

On high-density, high-precision PCBs, the pitch and line width are typically 0.3mm (12mil).

The public place is generally 80mil, which is more important for applications with microprocessors.

2. How high is the high speed board?

When the rising/falling edge time of the signal is < 3~6 times the signal transmission time, it is considered as a high speed signal.

For digital circuits, the key is to look at the steepness of the edge of the signal, that is, the rise and fall times of the signal.

According to the theory of a very classic book "High Speed Digital Design", the signal rises from 10% to 90% less than 6 times the wire delay, which is a high-speed signal!------ That is, even a square wave of 8KHz The signal, as long as the edge is steep enough, is a high-speed signal, and the transmission line theory is needed for wiring.

3. Stacking and layering of PCB boards

The four-layer board has the following stacking sequences. The following explains the advantages and disadvantages of various stacks:

In the first case, it should be the best case of a four-layer board. Because the outer layer is the ground layer, it has a shielding effect on EMI, and the power layer is also reliable close to the ground layer, so that the internal resistance of the power source is small, and the best suburban fruit is obtained. However, the first case cannot be used when the density of the board is relatively large. Because of this, the integrity of the first layer cannot be guaranteed, and the second layer signal will become worse. In addition, this structure cannot be used in the case where the power consumption of the whole board is relatively large.

The second case is one of the most common ways we usually use. From the structure of the board, it is not suitable for high-speed digital circuit design. Because in this configuration, it is difficult to maintain a low power supply impedance. Take a plate of 2 mm as an example: Z0 = 50 ohms is required. The line width is 8 mils. The thickness of the copper foil is 35 цm. Thus the middle of the signal layer is 0.14mm between the ground and the ground. The formation and power layer are 1.58mm. This greatly increases the internal resistance of the power supply. In this structure, since the radiation is spatial, a shield plate is required to reduce EMI.

If the resistor is connected in parallel with the load, the resistor will absorb some of the signal and it will be unfavorable for transmission (I understand). When the TTL/CMOS standard 24mA actuate current is selected, its export resistance is approximately 13Ω. If the MITL resistance Z0 = 50Ω, then a 33Ω source discharge resistor should be added. 13Ω+33Ω=46Ω (approx. 50Ω, weak underdamping contributes to signal setup time)

When other transmission standards and drive currents are selected, the matching resistance will vary. In high-speed logic and circuit design, for some key semaphore, such as clocks, control signals, etc., we refer to that you must add source-side matching resistors. 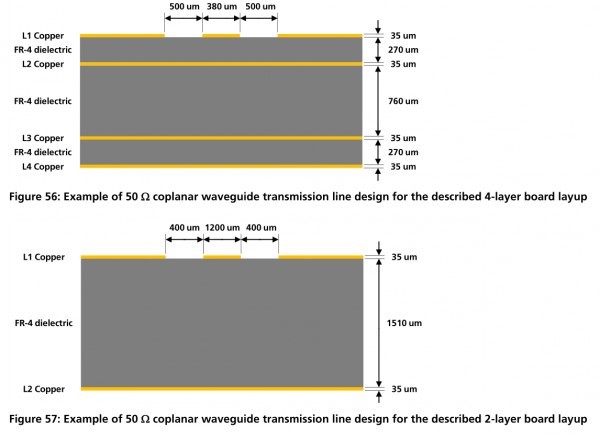 The power cord is as short as possible, straight, and it is best to go tree-shaped, do not take the ring.

Ground loop problem: For digital circuits, the ground loop caused by the ground loop is tens of millivolts, while the TTL anti-interference threshold is 1.2V, and the CMOS circuit can reach 1/2 supply voltage. That is to say, the ground loop circulation will not adversely affect the operation of the circuit.

On the contrary, if the ground wire is not closed, the problem will be even bigger, because the pulse power supply current generated by the digital circuit will cause the ground potential imbalance at each point. For example, I measured the ground current of the 74LS161 in reverse when the inverter is 1.2A. The 2Gsps oscilloscope measured the ground current pulse width of 7ns). Under the impact of large pulse current, if a distributed ground line (line width 25 mil) is used, the potential difference between the ground lines will reach the level of 100 millivolts.

After the ground loop is used, the pulse current is spread to various points of the ground line, which greatly reduces the possibility of interference with the circuit. With the closed ground wire, the maximum instantaneous potential difference of the ground of each device is measured to be one-half to one-fifth of the unclosed ground.

Of course, the measured data of boards with different densities and different speeds are very different. I said above, it refers to the level of the Z80 Demo board attached to the Protel 99SE. For the low-frequency analog circuit, I think the power frequency after the ground line is closed. Interference is sensed from space, which is not simulated or calculated anyway. If the ground wire is not closed, there will be no ground eddy current.

Beckhamtao said, "But the ground-frequency open loop, the power frequency induced voltage will be larger." The theoretical basis and the two examples, I took over one of the others 7 years ago. The project, precision pressure gauge, uses a 14-bit A/D converter, but the actual measurement has only 11 effective precision. After investigation, there is 15mVp-p power frequency interference on the ground.

The solution is to simulate the ground loop of the PCB. Scratch, the front-end sensor to the A/D ground wire is distributed by the flying line. Later, the mass-produced model PCB is again produced according to the flying line, and there has been no problem so far. The second example, a friend loves a fever, DIY a power amplifier, but the output always has a hum, I suggest it cut the ground loop, the problem is solved. Afterwards, this man looked at dozens of "Hi-Fi machine" PCB diagrams, confirming that no machine used a ground loop in the analog part.